The New Year’s Eve toast hides an ancient tradition that few people really know. It is a ritual that every day accompanies memorable events, special occasions and celebrations of all kinds. Sometimes people raise their glasses to the sky to pay homage to a person, to remember an event, or to honor a recurrence. Whatever the reason that leads to raise the glasses and make the crystals clink, behind the toast is hidden a long tradition, which has its roots in time and history. Let’s discover it together.

Whether it’s a winery party, a birthday party, or a “commanded party,” the ritual of the toast never fails to grace tables around the world. Its history is very ancient. The first evidence of this ritual dates back to the time of the Huns. The nomadic warrior population, coming from Southern Siberia, which arrived in Europe in the fourth century and led by Attila, used the toast during banquets and celebrations. Edward Gibbons, English historian, writer and politician, in his history book of the XVIII century The Decline and Fall of the Roman Empire, writes about how Attila, during a feast, had, for three times, made toasts during a rather elaborate dinner.

The Greeks toasted to wish health and well-being. The toast was also considered an honest way to show the other diners that the drinks served were not poisoned (in the same way that a handshake proved to the other that nothing was hidden in the sleeve of the interlocutor).

The Romans inherited this habit from the Greeks. They added to the tradition a curious detail. In fact, they used to dissolve in the wine crumbs of toasted bread, in order to reduce acidity. From here was created the term “toast”, from the Latin word “tostus“, which means “to dry” or “to burn”. Toasting became such an important ritual that the Senate even decreed that every diner should toast to Augustus (the first Roman emperor), at the beginning of every meal.

But let’s get back to today and the New Year’s Eve toast. It is a custom that also represents an exception to etiquette. Unlike many other occasions, the toast to celebrate the advent of the new year, is the only one that can be made at the stroke of midnight. In every other occasion, from graduation parties to birthday parties, from the Palio del Recioto e dell’Amarone to the wedding of a friend, the toast must always be made before starting to eat… Just like ancient Romans did. 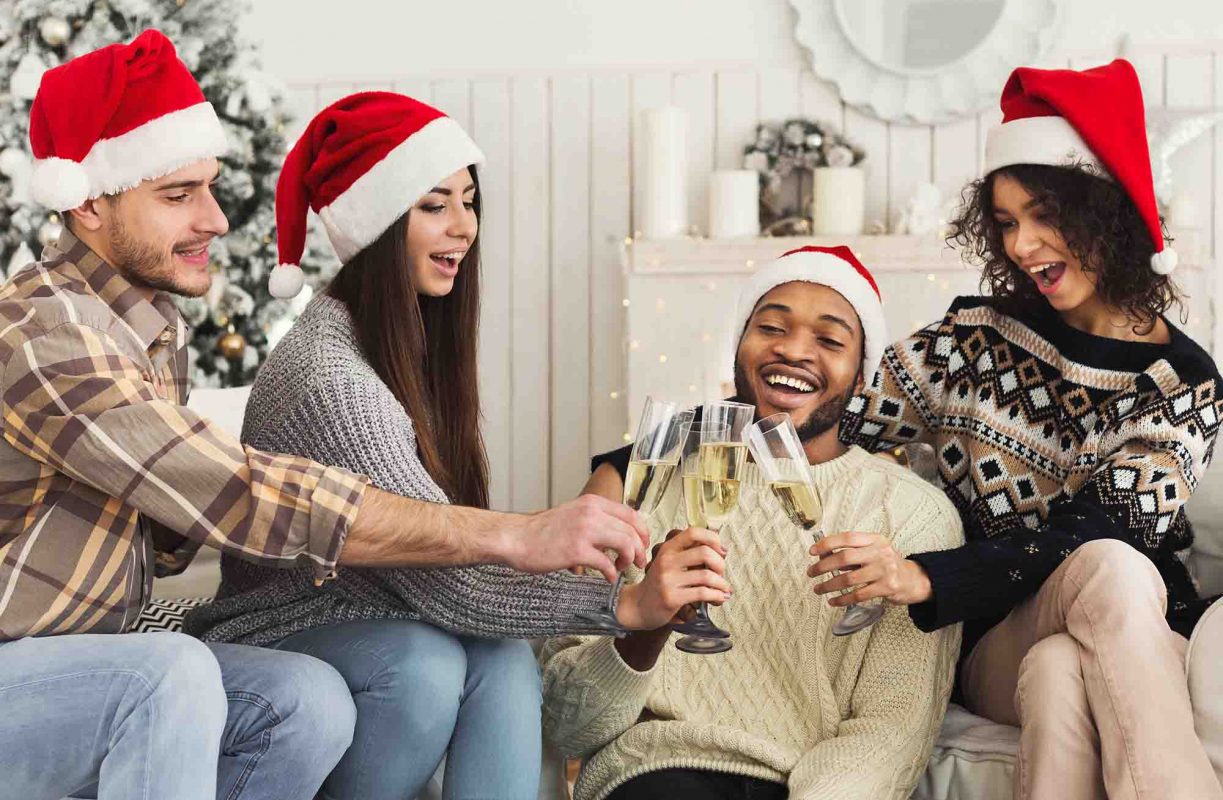 Another peculiarity of the toast of New Year’s Eve is to make it standing up. Actually any toast should be made standing up, it is expressly required by etiquette. For the toast of New Year’s Eve are good both Spumante wine and champagne. The glasses to be used are slightly different. In order to best savor the aroma and not to lose perlage, the ideal would be to use a glass halfway between flûte and cup.

The most correct way to serve brut sparkling wine and champagne is to arrange all the glasses on a tray and fill them, one by one, in front of the guests. Alternatively it is possible to wait until all the diners are seated at their place and then start pouring the sparkling wine before starting to consume the meal. Another tradition that accompanies the toast of New Year’s Eve is the one that sees guests eating grapes or pomegranate seeds, while waiting for the host to uncork the bottles of bubbles and serve everyone.

How they toast in the rest of the world

The New Year’s Eve toast is a tradition that is celebrated all over the world, but with some variations. For example there are places where to the smooth sparkling wine, are preferred cocktails prepared with sparkling wine or champagne. Perfect solutions even for those who are not particularly accustomed to drinking.

Instead of sparkling wine, in Germany the toast of New Year’s Eve is made with the typical alcoholic beverage called Feuerzangenbowle. Translated literally means “drink of fraternity” and it is served in a bowl full of red wine spiced with cinnamon, cloves and orange peels. It is a beverage very similar to our mulled wine. Germans are used to toast and eat dried fruits and smoked herring at the same time.

On the other side of the world, in Japan, the toast of New Year is made with sake, while 108 gongs are struck. Finally, in Russia, it is customary to write a wish on a piece of paper, burn it and throw it into a glass of Spumante, which must then be drunk at the stroke of midnight.