Wine Vinegar: aged in oak from an excellent blend of red wines

Red wine vinegar is a product obtained from the fermentation of red wine, which occurs thanks to the action of aerobic bacteria of the genus Acetobacter. The word vinegar derives from the Latin “acētum” and means “sharp, sour”. Red wine vinegar is a very ancient product, already known in ancient times. Used as a condiment, it has also found, over time, a satisfactory use as an element of food preservation. In fact, in the past it was already clear that adding vinegar contributes, together with the heat, to breaking down the microbial load that may be present in food.

Therefore, since ancient times, red wine vinegar has been used to season and flavor dishes and dishes. It has many beneficial properties for health and beauty. It is also used as an economical and ecological degreasing agent. In Chinese folk medicine it is even used to prevent and / or reduce the spread of viruses.

The history of red wine vinegar is very ancient. It is a product even mentioned in the Bible, where it is called homez. The earliest records date back to prefaronic Egypt. Traces of it have been found in an approximately ten thousand year old vase, undisputed evidence that Egyptians, Babylonians and Persians already knew and used vinegar.

Populations used this product to season dishes and to safely transport food, during longer journeys. They also used to mix red wine vinegar with water to make a thirst-quenching drink, very popular with travelers and farmers.

In ancient Greece it was called Oxycrat and was the drink of the people. Mixed with water and honey, it was kept in special jars called axydes. Hippocrates used it to treat wounds, sores and respiratory problems.

Even the Romans used it as a thirst-quenching drink by mixing it with water. They called the compound “posca”. In the Middle Ages, Agresto was prepared, a vinegar made with unripe grapes and with a fresh and sour taste. From the 1300s to the 1700s, vinegar became an indispensable element in combating diseases and epidemics such as the black plague and cholera.

Vinegar, in the not too distant past, was even used as an article of hygienic perfumery by kings, queens and princes throughout Europe. In the 19th century, the ladies smelled vinegar to regain consciousness when they felt too oppressed by the tight bustiers. The landlords then always left a bottle open at the bedside of the sick, so that those who had to take care of them would not risk getting sick in turn.

The long history of red wine vinegar has seen it protagonist in a thousand guises: vinegar syrups, ointments, decoctions, lotions and ointments. Vinegar has always played a very important role in human history.

Red wine vinegar is a product known and widespread in kitchens all over the world. In particular in Germany and Italy it finds its maximum expression. Like an Amarone grappa or a Veronese rosé, there is a wide range. The best quality is that obtained from the fermentation of red wine in oak barrels for at least two years. In this way the vinegar takes on a complex and mature flavor, fragrant and full-bodied. The final result is an irreplaceable product in the kitchen, which is unparalleled and which manages to enhance, without covering or changing the flavors of the dishes. Its delicacy goes perfectly with food and accompanies the taste of food, bite after bite, completing the flavor for a unique gastronomic experience.

There are many types of vinegar: red wine vinegar, malt, apples, pears, honey vinegar, white, balsamic, superfine, rice, coconut, cane and raisins, beer vinegar and various flavored vinegars. Each of these specialties binds more or less well to the dishes. For example, the red wine vinegar obtained from an excellent blend of wines, such as those of the Valpolicella of the Fratelli Vogadori, goes perfectly with game dishes, red meats, salads with a delicate flavor and game such as sweet and sour wild boar. All rich and tasty dishes with a strong and decisive flavor, highlighted by the red wine vinegar from the Vogadori cellars. 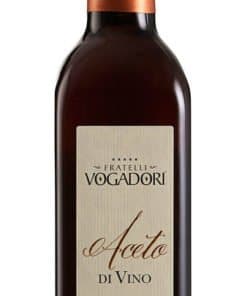