Recioto della Valpolicella: one of the oldest sweet wines in Italy

Recioto della Valpolicella is a DOCG sweet passito wine produced exclusively in Valpolicella, in the province of Verona. It is made only with grapes of native vines: Corvina (45-95%), Rondinella (5-30%), Corvinone (up to 50% maximum to replace Corvina), Oseleta and Negrara. Up to 25% of red grape varieties authorized for the province of Verona are allowed in the blend. The color of the skin of the berries is a factor characterizing the vines. In Italy there are 500 different varieties of vines, 300 of these variteties are with red berries.

It is a very particular area that, when viewed from above, almost seems to have the shape of a man’s hand. Here, in fact, a series of gentle hills follow one another that slowly degrade towards the plain. In each valley and on each hill, specific climatic and pedological characteristics are found. A well-defined set of climatic, physical and biological factors that influence the cultivation of vineyards and the consequent production of wine.

The factors that most influence the area are the protection of the Lessini mountains in the north, the proximity of Lake Garda and the southern exposure of the land. These conditions lead to a rather mild climate and not too rainy.

Within this macro area there are also sub-areas. The first is called “Classico” and is the oldest. This includes the municipalities of Negrar, Marano, Fumane, Sant’Ambrogio, and San Pietro in Cariano. The second, on the other hand, is that of the Valpantena which includes the valley of the same name that rises towards the Lessini mountains passing through Poiano, Quinto di Valpantena, Marzana and Grezzana.

The drying of the grapes ois a natural process.  Once harvested, the grapes are left to dry till January / February, in dry and well-ventilated rooms. The health of the grapes is constantly and periodically checked. The pressing takes place in late January, or early February, depending on the weather during the winter.

The next phase, namely fermentation, takes place inside steel containers, always following the natural method, in dedicated rooms with controlled temperatures. The breaking of the hat is performed several times a day over the next 40 days. During fermentation, the carbon dioxide produced by the yeasts pushes the skins of the grapes upwards, dispersed throughout the mass. The skins then pile upwards, creating a thick floating layer, called a cap. In the part under the cap, all the must remains.

To get the most out of the skins, this “hat” needs to be broken several times a day. The breaking is called pumping over and takes place by pumping the must from the lower to the upper part, thus causing a real washing of the skins. By doing this, all the substances they contain are extracted from the skins.

The result that follows the previous production phases is a wine with a deep garnet red color. The scent is intense and very fine. Jam-like and spirited nose with excellent complexity. Recioto is a balanced, harmonious wine with a hint of ripe fruit and black cherry. It is a wine with a warm and enveloping elegance, with a considerable length and persistence.

The peculiarity of Recioto is that of combining the typical characteristics of an important red wine with those of a passito, of great complexity and elegance. It goes very well with sweets and fruit tarts, but also with chocolate. Excellent with traditional dry pastries. Ideal to accompany a platter of aged cheeses, aged over 9 months, or blue cheeses served with jams or mustards. 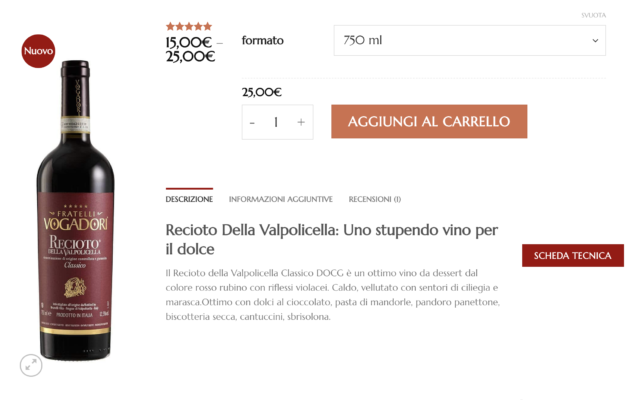